In this piece, criminologist Ellen Van Damme, who is doing research on female migration from Honduras to the United States (USA), at the Center for the Study of International Migration (CSIM) of the University of California Los Angeles (UCLA), reflects on her first impressions on the visit to the USA-Mexico border. She went to San Diego as part of the commencement of the Fulbright enrichment program, which was taking place at the University of California San Diego (UCSD), and organized by Ms. Ann Kerr, Fulbright Coordinator at UCLA.

On Saturday November 6th, 2021 9:40 am, I met up with Orlando, a Fulbright fellow in San Diego, and his girlfriend Emily1 at the Old Town train station of San Diego, from where we took the trolley (tram) to 12th & Imperial (the Syncuan Green Line), and then another one to San Ysidro (the UC San Diego Blue Line), the final stop to arrive at the border with Mexico. Orlando, who also has experience in migration studies, guided our way along the border using Google Maps, and gave some very valuable insights and information. For example, Biden still did not (fully) undo the Remain in Mexico policy installed by Trump, which requires people seeking for asylum to wait in Mexico until their case has been processed.

The first thing we saw when stepping out of the trolley in San Ysidro was a McDonald’s. This is the place where asylum seekers are often dropped off once granted asylum status in the USA (“Welcome to America!”). The asylum seekers, often arriving with no money at all, would go into McDonald’s to ask for food or for coins to make a phone call from the public phone booth at the trolley station. Orlando pointed at the old public phone booth, which reminded me of the movie Sin Nombre, where the main character, who had lost both her father and brother along the migrant trail, finally made it across the border and called a family member from a similar-looking old public phone, making a llamada cobrada (reverse charge call).

In front of McDonald’s is the San Ysidro Land Port of Entry, where those with legal permits to cross the border enter into the USA by foot. If we would have walked straight down, in the opposite direction of the trolley line, we would get to the place where you can cross the border with Mexico on foot. We took some pictures with the three iron conchas (symbolizing the Mexican sweet bread), and started walking west in the direction of the fence.

While crossing the bridge, we saw the tunnel through which people crossed the border to the USA by car. Right next to it, was an area where selected cars and the passengers were being checked. When the passengers do not pass the border control, their car was being confiscated, and they would have to walk back to where they came from. The confiscated cars were stored on the other side of the bridge, in an outdoor area. Some car windows looked either rolled down or smashed. Cars with an A or a word beginning with the letter A, allegedly belong to those suspected to enter the USA to ask for asylum. Border control agents are said to refer to them as “Apples” or some other A-words, in order not to use the word “asylum seeker”. Orlando said that people would sometimes rent expensive looking cars in Mexico to cross the border, to attract less the attention of border control agents.

At the other end of the bridge in Tijuana, we could see a huge bow. On the USA side was another border crossing, where loads of cars were going towards Mexico. The USA-Mexico border, supposedly still closed because of Covid, was a pretty busy crossing.

We continued walking west in the direction of the fence. Orlando pointed at an asylum detention center, which we passed by before getting to the fence. I could neither see nor hear anyone. When we finally reached the wall, we realised that the wall is actually a double wall. The old wall, closest to the USA side, was old, low and rusty, with holes and barbed wire. A few meters behind was the newer, taller, and sturdier wall. High poles carried spots to brighten up the walls at night. In the distance, we could see how massive the wall was. It made me think of the Chinese wall that meanders up the mountains. The only difference is that here people risk getting shot if they would walk on the wall.

We walked through some lower bushes and along the road, up until the fence all of a sudden became lower (because the sidewalk was higher), and we were able to look over the fence. A bit further down, the wall ended. The only thing that stopped us from crossing, was a sign that read “No Trespassing”.

We continued walking down the road until we arrived at the Tijuana River Valley. There we headed on the trail that would take us to the Friendship Park. It was 1 pm, we still had a one-hour hike ahead of us, and according to Google the park would close at 2 pm. We decided to grab an Uber, so that we would get there on time. After the first Uber driver cancelled, the second one showed up 20 minutes later. After a 10-minute drive, the roads were blocked and we had no other choice then to continue on foot.

We sat down for a minute, trying to decide what to do. Orlando and Emily were so kind to share their lunch with me. I was badly prepared: I had brought one bottle of water, no food, no hat, no sunscreen. After a quick bite, we decided to continue. We asked around about the park, but nobody had heard of it, even though it was close by.

Walking through the park, the contrast could not be any bigger: luxurious houses across the fence in Tijuana, and dessert as far as you could see in the US.

After half an hour, we arrived at a big gate. It was 2:20 pm, but there was no sign of people who had met up with their family members on the other side of the wall. A border control agent was guarding the fence. He covered his face with a bandana when he saw me taking pictures of the fence and its surroundings. Orlando flipped his Border Angels hat and approached the guard to ask about the family reunions. Although we had thought that the families could meet in the area in-between the two fences, that was not the case at all. Family members from the USA side could cross the first fence, to get closer to the other fence, through which they could talk with their loved ones in Mexico. However, the fences had remained closed for more than a year. The guard said that they were closed since “around the time of Covid”.

We walked down towards the ocean, where the fence all of a sudden ended. The second (USA) fence ended several dozen meters before that. The last bit of the fence had no barbed wire on it and was much lower. You could easily swim around it. We could walk to the fence with Mexico, but we refrained from doing so. We were not in a position to get in trouble with border patrol agents, so we stood there for a while, on the USA side, staring at the other side of the wall. Looking at the waves crashing into the final bit of the wall, I could not stop pondering to myself: what does freedom mean?

The fact that the fences teasingly end a couple of meters into the ocean, shows that the wall is a symbolic wall. In fact, the wall is a one sided wall because there is  significant medical tourism from the USA to Mexico, and many Americans live in luxurious apartment buildings in Tijuana, and commute to their jobs in the USA. What does freedom mean?

While staring at the people on the other side of the wall, Orlando asked me which emotions represent my experience in San Diego. My three emotions were ambivalent. When I arrived in San Diego I felt relaxed: the city gave me a very laid-back impression which is in stark contrast with the hasty business of Los Angeles. Arriving at Barrio Logan the night before, the area and loud Latino music reminded me of Honduras and made me feel home and happy. But I also felt a deep sadness: to hell with the fucking wall! I saw the children running around on the Mexican beach, peeking their heads through the fence to look at us. What does freedom mean?

While we were guarding our distance from the fence, complying with the warning signs, we saw a group of four white adults walking all the way up to the fence. We were shocked and at the same time curious to see how quick a border patrol agent would come down to tell them off. But nothing of the sort happened. The American tourists took pictures, selfies, wandered around, laughing at the fact that they were actually not allowed to be there, completely oblivious of their white privileges.

When I walked back uphill, in the direction of the public restrooms, a young Latino man came walking downhill. He was wearing a black shirt and had a black face mask in his hand. All of a sudden, a white border patrol SUV came racing downhill, followed by a military-like guy on a quad. The SUV almost ran over the Latino man. He stopped, was questioned, put against the car, on the ground, had to hand over his belongings, and was carried away in the car. Apparently, he walked a bit on the road next to the wall, where it says “No Trespassing”. The white people wandering around at the fence did not even get a warning, the young Latino man was arrested. What does freedom mean?

I always love washing my hands whenever I am in the proximity of the sea or ocean. Here it was not allowed to get into the water, supposedly because of drainage pollution. But is this really the reason? The drains pollute the ocean in LA too whenever it rains. This only means a ban on entering the water for a limited time, for example 72h. Here the ban means you cannot swim in the ocean, ever. What does freedom mean? 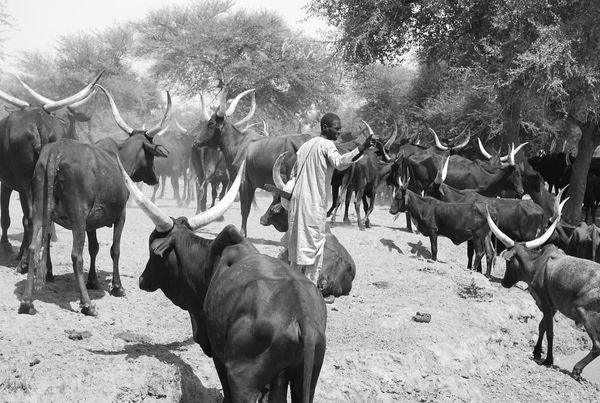 From the security crisis in the Sahel to the migration flows in the Mediterranean, from past and present civil wars to wildfires and flooding in Europe, a specter is haunting ⋙