The death of four American and five Nigerien soldiers in north-western Niger, along with France seeking authorisation to arm its remotely piloted aircrafts (RPAs) in the African Sahel, have recently brought the US and French presence in the area into the public discourse. Here, both the French and US military are shifting from traditional aerial operations to the use of RPAs for intelligence, surveillance and reconnaissance (ISR) purposes.

Although civilian drones can be weaponized, state actors have until now - as far as we know - restricted their military operations to combat drones. As opposed to the smaller civilian drones, combat RPAs are technologically intricate pieces of military hardware that can cost millions of dollars. At the present moment, the most common RPAs are the Predator (MQ-1) and the subsequent Reaper (MQ-9), produced by the American firm General Atomics in either an armed or unarmed version. Due to the American observance of the voluntary Missile Technology Control Regime, the US Congress exerts significant control on the use of American-built RPAs by other states. Its authorisation is required for the purchase of any models and it controls any changes to the scope of their use, including such things as the area in which it is used. Both Predators and Reapers are currently deployed, in their unarmed version, from a shared Franco-American drone base in the Nigerien capital Niamey. Those RPAs have an unlimited mission radius, a flight endurance of more than 27 hours and an operating altitude of up to 14 and 20 kilometres respectively.

French troops entered the region in 2013 under the wider mantle of Operation Serval, their response to the Tuareg rebellion in Mali and the subsequent rise of militant Islamist groups in the whole Sahel region. The US army has been providing training to Nigerien forces since 2002: the deployment of RPAs began in 2013 following the invitation by the Nigerien government to contribute – alongside French troops and the local army – more extensively to the military effort against Islamist terrorist groups, such as Boko Haram.

Since their arrival, the US have planned to move their RPAs to a newly built base in Agadez, in central-northern Niger, that is mired in controversy following an escalation of construction costs and increased scrutiny by journalists and politicians alike. In spite of these troubles, the base is expected to become operational within the next two years.

The French presence in Niger has been justified through their longstanding, formerly colonial, interest and proximity to the country. Their mandate for the 3000-strong, anti-insurgent Operation Barkhane headquartered in Chad, allows for a proactive approach throughout the Sahel region. In this context their use of RPAs for targeting purposes has not been the cause for any real debate and has been displayed to the public in an open and transparent manner.

The main controversy in America arises from the feeling of obscurity that surrounds the military involvement in the area. This has been highlighted by media reports decrying secret drones bases in Africa and US Senators expressing their surprise at the reach of the armed forces in Niger. Although media reports since 2013 have followed the action closely, it is true that the US have tried to keep a low profile for their operations, both in the region and in the domestic public sphere. Particularly in Muslim-majority countries this type of behaviour is adopted to avoid a backlash from local populations, who might perceive US involvement as a foreign invasion, even when the government, as the Nigerien one has, openly asked for assistance. It is also a consequence of the 2012 Department of Defense's DSG (Defense Strategic Guidance) calling for “small-footprint approaches” on the African continent to prevent such local resentments and keeping American soldiers away from unnecessary risk. To this end RPAs can be viewed as a polarising double-edged sword. Supporters consider them a precise tactical weapon akin to a surgical knife, whereas their detractors perceive them to be robotic killing machines that dehumanise war.

There is a general lack of public as well as institutional awareness and clarity regarding the scope and objective of the US presence in the area. In fact, the US only fly unarmed drones in the area to gather intelligence and do not take part in any direct engagement. However, the information acquired is often passed on to the French and African troops, who use it for targeting. Therefore, it could be argued that through their use of RPAs the borders of the American restraint in the application of lethal violence are rather blurred.

Update 30 Nov 2017. As it happens, this temporary restraint did not last long: "The government of Niger has given the Defense Department permission to fly armed drones out of the Nigerien capital, Niamey, Pentagon officials said Thursday, in a major expansion of the American military’s footprint in Africa," The New York Times reports.

Dominic James Stanley:
now attending the Master in International Security Studies at the Scuola Superiore Sant'Anna in Pisa. He grew up in Berlin and gained his BA in Economics and Politics from the University of Exeter.

Angelantonio Duraccio:
Born and raised in Naples. Graduated in Political Sciences from the University of Urbino. Currently a student of the Master's degree in International Security Studies at the University of Trento and the Scuola Superiore Sant'Anna. 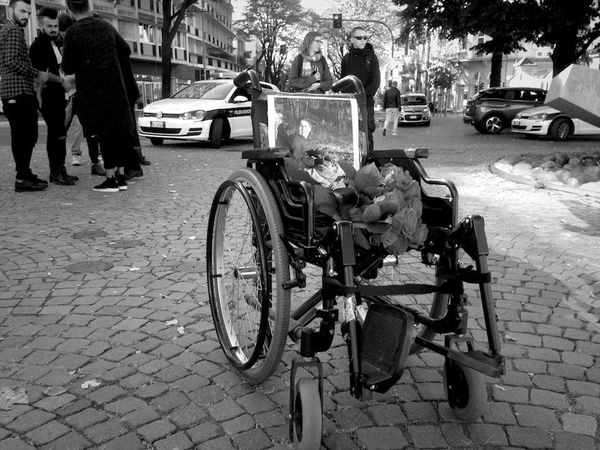 By Mattia Farris, Beatrice Autelli, Claudia Knering, and Alessia Muzzin - The wealthy Italian province of Bolzano/South Tyrol was already known to the international community for the political division ⋙

Everybody wants more participation, not less. But the current social project for Europe ultimately offers a kind of feeble, diluted participation that we will affectionately call objet petit p: a ⋙